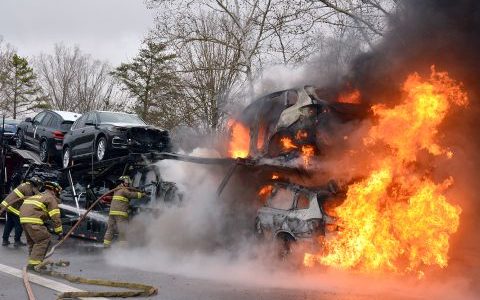 These trucks are transporting massive amounts of weight which puts incredible friction on the brakes. Unfortunately, these types of brake fires involve a special type of metal that are extremely difficult to extinguish without a specialized type of fire extinguisher.  However, these are the type of situations that Cold Fire Tactical are made for and could quickly knock down a fire and limit the damage. These type of fires are occurring every day.

Here is a recent article we found courtesy of Mark White of The News Journal, http://ics.link/u1r08k

Our thoughts and prayers are with Deputy Jay Edward Brannon of the Portage County Sheriff’s Department.  While attempting to serve a warrant the Deputy someone attempted to set him on fire. 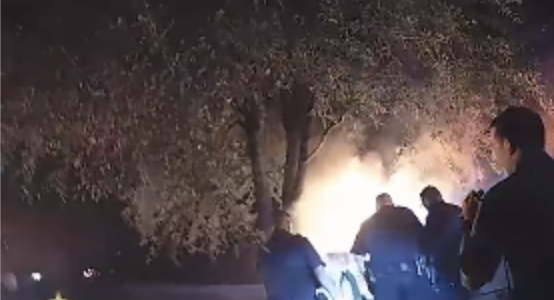 Another example of Cold Fire Tactical in use at a recent political rally in Seattle.  The Seattle Police Department did an excellent job controlling the scene and when demonstrators attempted to set fire to a “Blue Lives Matter” they quickly used Cold Fire Tactical.

You can view the entire story about this incident by visiting our Youtube link here:

We know first hand of the benefits of Cold Fire Tactical and it brings an even bigger smile to our faces when we hear success stories from those using Cold Fire Tactical in the real world! Recently, we received an email that said that our Cold Fire cans “kicked this fires butt!”  We wanted to share the full email and the letter of commendation from the business that was spared fire damage because of the quick-acting response of two Sturgeon Electric Company employees.

Man attempts to light himself on fire

Police said the 29-year-old Wright City resident doused himself in gasoline around 6:30 a.m. on the parking lot of Liberty High School on Sommers Road.

Authorities said the man was detained and held on the ground by several school staff members until officers arrived. Staff members were also able to remove the lighter the man attempted to use from his possession.

The suspect was taken into custody. He was also transported to the hospital to be treated for the exposure of chemicals to his skin.