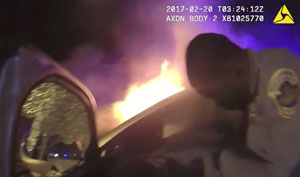 The incident happened after 10 p.m. Sunday when police say a man driving on Bladensburg Road near the National Arboretum ran off the road, hit a pole and his car caught on fire.

It happened less than a half mile from the Metropolitan Police Department’s 5th District station. Officer Steven Hines was headed to the station near the end of his shift when he rolled up on the fire.[/st_text][st_video video_source_link_youtube=”https://youtu.be/TeCxvaiCVmM” video_youtube_dimension_width=”500″ video_youtube_dimension_height=”270″ id_wrapper=”video_81e09c5c56789dcfad6c86f47924a67d” video_sources=”youtube” ][/st_video][st_text id_wrapper=”elm_59fda82c09541″ ]

Video from his police body camera shows him approaching the car and asking if anyone was inside.

“I tried to look in it but there was too much smoke,” Hines said.

On the video, Hines is then seen breaking the window. A man is inside. Although the man repeatedly replies “yes sir” to Hines, he doesn’t do anything Hines asks him to do.

“He wasn’t able to take his seat belt off,” Hines said. “He seemed out of it.”

By then backup had arrived. Other officers who were about to finish the night shift had responded after hearing what was happening.

“We were right in front of the station when the call came out, so we quickly made a U-turn,” said Officer Jacoby Taylor.

Police say Officer Roberto Adams was able to get the man’s seatbelt off, and then the officers pulled the man to safety, but their work was not done. They say they had to make sure no one else was in the car.

“The smoke was very thick, and so it was hard to see,” said Officer John Hayes.

The officers broke several other windows before determining that the man had been the only person in the car.

Police have not released that man’s name but they say he was treated and released from the hospital.

The officers say they’re proud of the way they worked as a team to save him and their Sergeant says she’s proud too.

“It was amazing,” said Sgt. Nicole Brown. “It was definitely heroism at its finest.”

“If [Officer Hines] had arrived even maybe two to three minutes later it would have been too late,” she added. 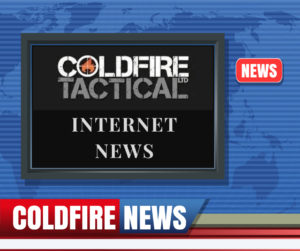 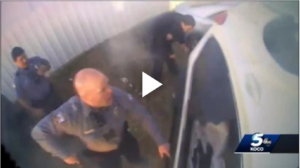